The Great Globular Cluster in Hercules (M13, NGC 6205)
(place cursor over image to see a rollover with labels)

Description:
No one forgets their first view of M13 in the eyepiece.  It's a remarkable site, with speckled stars arising from the center giving it an almost 3-dimensional appearance. This globular cluster is 25,000 light years away, orbiting near the center of our galaxy.  Globular clusters contain stars at such high density that the night sky would be filled with light, and planetary orbits would be unstable due to gravitational influences from nearby stars.  The stars of M13 are very old and consequently contain very little metal (they were formed at a time when basic elements like iron had not yet been forged by other stars).  So it is unlikely that earthlike planets formed around any of the stars in this cluster.  The message sent to M13 by the Arecibo Radio Telescope team in 1974 will most likely fall on deaf ears.

Most of the stars contained within M13 are no longer burning hydrogen to helium in their core.   These stars have left the main sequence and are engaged in either burning hydrogen to helium in their outer shell (red giant and supergiant phase) or burning helium to carbon in their core (horizontal branch phase).   The Hertzsprung-Russell diagram for the globular cluster M5 is similar to what might be seen for M13 (from www.SEDS.org).   I have color-labeled a few regions of this diagram here (I suggest opening this in a separate window while reading the notes below).  A few things are interesting to note:

1.  There is an obvious turn off point (shown in red), which indicates that most of the hot, large, blue stars have already left the main sequence and have gone down the path of red giants and supergiants (tan region).  Their core hydrogen has been exhausted, and they are now burning hydrogen to helium in their shell, causing expansion (more luminous) and cooling (shifting to the upper red region of the HR diagram).  A prominent turn off point in the HR diagram is characteristic of very old globular clusters, whereas young open star clusters generally show a predominent main sequence population.

2.  Once a red giant/supergiant exhausts hydrogen in its shell, fusion of helium to carbon begins in the core (helium flash, point C).  The renewed fusion increases the stellar temperature, shifting it into the blue, Horizontal Branch region of the HR diagram (point D).

3.  Note the gap in the Horizontal Branch region (point E).  This is populated by RR Lyrae variables, which are also burning helium to carbon in their cores.  RR Lyrae stars are variables whose brightness changes in a predictable way over a given period.  Because they are unstable, they do not remain at a given point on the HR diagram, hence creating a gap in the Horizontal Branch.  The period-luminosity relationship of RR Lyrae stars can be used to determine absolute magnitude (magnitude at 10 parsecs), which can then be compared to apparent magnitude in order to determine distance (similar to the technique using Cepheid Variables).

4.  I've labeled a possible region for so-called "Blue Stragglers" in yellow.  Stars in this location are hot (blue) and still on the main sequence, even though they should have entered the turn off point a long time ago (hence the term Straggler).  Why they are still burning hydrogen to helium in their cores is not fully known- it is thought that Blue Stragglers might be derived from collision with another star within the crowded center of globular clusters, providing a renewed source of hydrogen for fusion.

With this background, you can appreciate that most stars in my image of M13 are very old and have left the main sequence.  The red stars are giants or supergiants that are burning hydrogen to helium in their outer shell.  The blue stars most likely represent at least three separate populations:  Horizontal Branch stars, Blue Stragglers, and RR Lyrae stars.

Back to Star Clusters 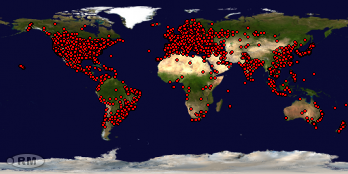